Judy Chu California Communist
truthabouteducation
In April 2012, then Florida Congressman Allen West got himself into hot water with the media, after claiming that 70 to 80 members of Congress were “communists.” While his terminology was too loose, in spirit, Mr. West was essentially correct. 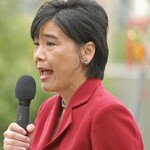 In a mocking interview with the Congressman, CNN presenter Soledad O’Brien confronted West with a list of Congress members, asking him to confirm if they were “communists.”

If West knew as much about communism as he does about radical Islam, he could have made a case for the affirmative for all those named. When Soledad O’Brien asked, “Judy Chu, is a communist????” West could, and should have said, “she’s probably one of the worst!!!”